Leonardo da Vinci is the first airport in Italy to have installed the eGate, which operates through a well-oiled synergy between ADR management (which buys, installs and maintains the good working order of the equipment from a technological point of view) and the Police. The Capital's airport currently has the greatest number of these devices installed: there are 59 digital gates activated by ADR so far, 51 at Fiumicino (23 at arrivals, 24 at departures, 4 in the transit gallery of the extra Schengen-Schengen) and 8 in Ciampino (4 at arrivals and 4 at departures).

The eGates are an innovative technology, more and more widespread at the main international hubs, which allows your passport to be checked in a totally automated way. They ensure the highest levels of security controls, and decrease passenger waiting times, benefiting the overall quality of the travel experience.

The traveller approaches an automatic gate and puts their open passport into the scanner, so that they can clear passport control. Then the gates use facial recognition technology to compare your face to the photograph recorded on the chip in your passport.

If the check is successful, the gate opens, if not the traveller will need to go to a control gate operated by a Boarder Officer.

From a more technical standpoint, the data and facial recognition of the passenger are checked instantly, because every machine is directly connected to the Interior Ministry database. 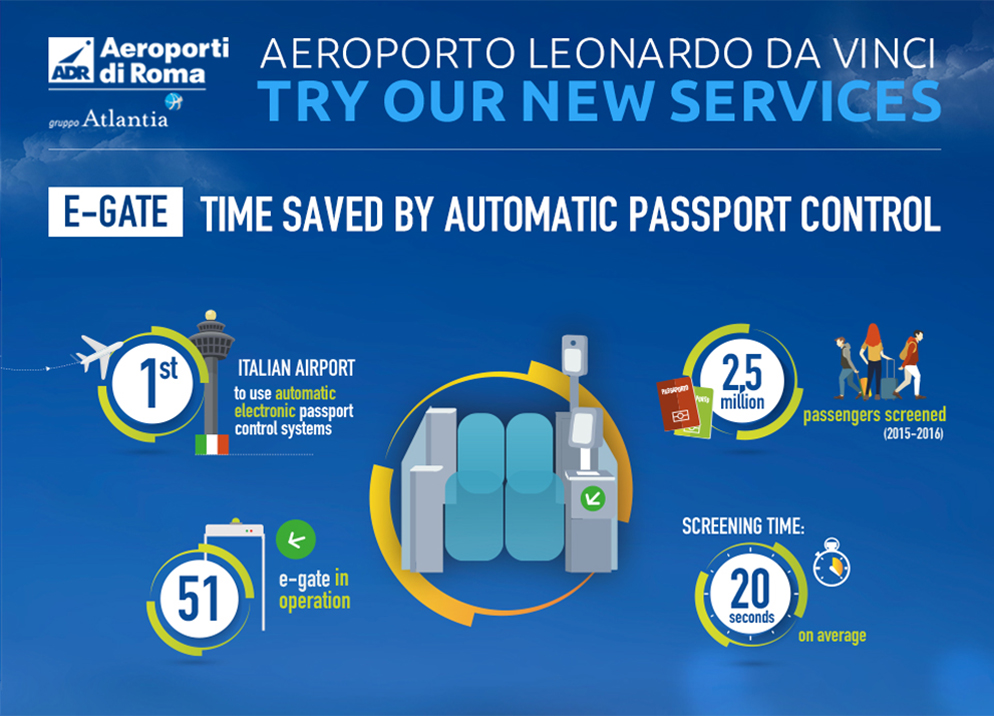 integrity of documents, analyses the facial and fingerprint bio-metric parameters (only for Italian passengers) and verifies that there are no reasons to impede transit.

The only conditions are that in order to use an eGate you need to have an electronic passport and be over 14. It is easily identifiable, just check that there is the appropriate chip symbol on the bottom of the front outer cover of the passport.

Thanks to a project implemented by Aeroporti di Roma, by the Public Security Department - Central Directorate of Immigration and Border Police and by the US Embassy in Italy in collaboration with ENAC and Italy’s Ministry of Foreign Affairs, the electronic gates – which have thus far only been accessible to European citizens aged 14 and over – can now also be used by American citizens at the departure and the arrival.

In addition to Americans, the e-gates are available to citizens of Canada, Australia, New Zealand, South Korea, Japan, Israel, Taiwan and  Singapore departing, arriving and transiting at Fiumicino.

By clicking on "ACCEPT NECESSARY COOKIES" or on the "X" to close this banner, only cookies that are functional for browsing the website will be installed on your device.

By clicking on "ACCEPT ALL COOKIES" you will give your consent to install all cookies including the profiling ones.