Given Rome’s central position with respect to the country as a whole, the Rome airport system serves a very large, consolidated catchment area.

Rome is the largest city in Italy, with a population of over 4 million and a higher than average per capita income with respect to the rest of Italy: two elements which, together with the countless historical and cultural treasures offered by the city, represent an excellent basis for starting new flights to any destination.

Rome is, in fact, among the principle travel destinations on an international level, and in 2019 recorded the arrival of over 23 million people (data source: Rome Tourism Board), an increase, compared to the previous year, of 2.7%.

The Italian capital is not only a tourist destination, but also the main Italian political and economic centre, the seat of all the foreign embassies and many of the largest multinational companies operating in Italy. Confirmation of this can be seen in the “analysis of passenger profiles” conducted over the last year, which revealed that almost 30% of the passengers for and from Rome airports travel for business reasons.

Taking a broader view, the 12 million inhabitants of the area within a radius of about 250 km of Rome, constitute a catchment area which can be described as “natural”; thanks to efficient and extensive road, motorway and rail connections (with a station at Fiumicino airport), Rome airports are easily accessible from all the main metropolitan areas of central Italy.

Furthermore, Fiumicino Airport is an intermodal hub that promotes air-rail integration: in addition to Leonardo Express connections with Rome city and regional services, Fiumicino Airport offers links with high-speed “Frecce Trenitalia”. Thanks to Frecce Trenitalia, it is possible to reach directly from the airport and in just a few hours, the center of the main cities of central and northern Italy, such as Florence, Bologna, Padua, Venice, Pisa, La Spezia and Genoa.

For the long-haul flights, in the absence of overlapping hubs in the territory, the catchment area served by Fiumicino airport covers a population of about 32 million people, including southern Italy and the islands. In fact Leonardo da Vinci Airport, offers flight connections all over Italy, reaching in 2019 approximately 25 destinations. 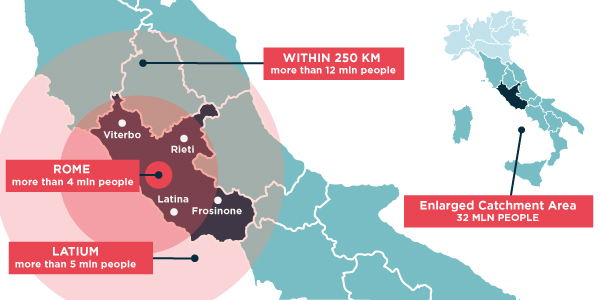