2 May 2019
"Flight Machines" at Fiumicino
The exhibition is inaugurated: "Leonardo's wings. The Genius and Flight". The inventions of the Genius of Vinci have been recreated on the first aeronautical machines in history.

The Flying Man with a wingspan of over 11 metres in length, the Flying Vessel that seems to soar from the water into the air, the Flying Machine in the shape of a Fan, ancestor of the modern glider. These are just some of the flight machines conceived and designed by Leonardo da Vinci that from now until January 2020 are on display at Terminals 1 and 3 of Rome Fiumicino airport named after him. The occasion is the celebration of the 500th anniversary of the death of the Genius of Vinci, which occurs today, May 2.

The exhibition "The wings of Leonardo. The genius and flight", promoted by Atlantia and organised by the subsidiary Aeroporti di Roma in collaboration with the National Committee for the celebrations of Leonardo, the Museo Galileo of Florence and Codice Edizioni, will be freely visited by travellers who crowd the terminals of the airport. This is the first time that Leonardo's machines, reproduced with absolute fidelity to the design drawings, have been exhibited inside one of the most important airports in the world. 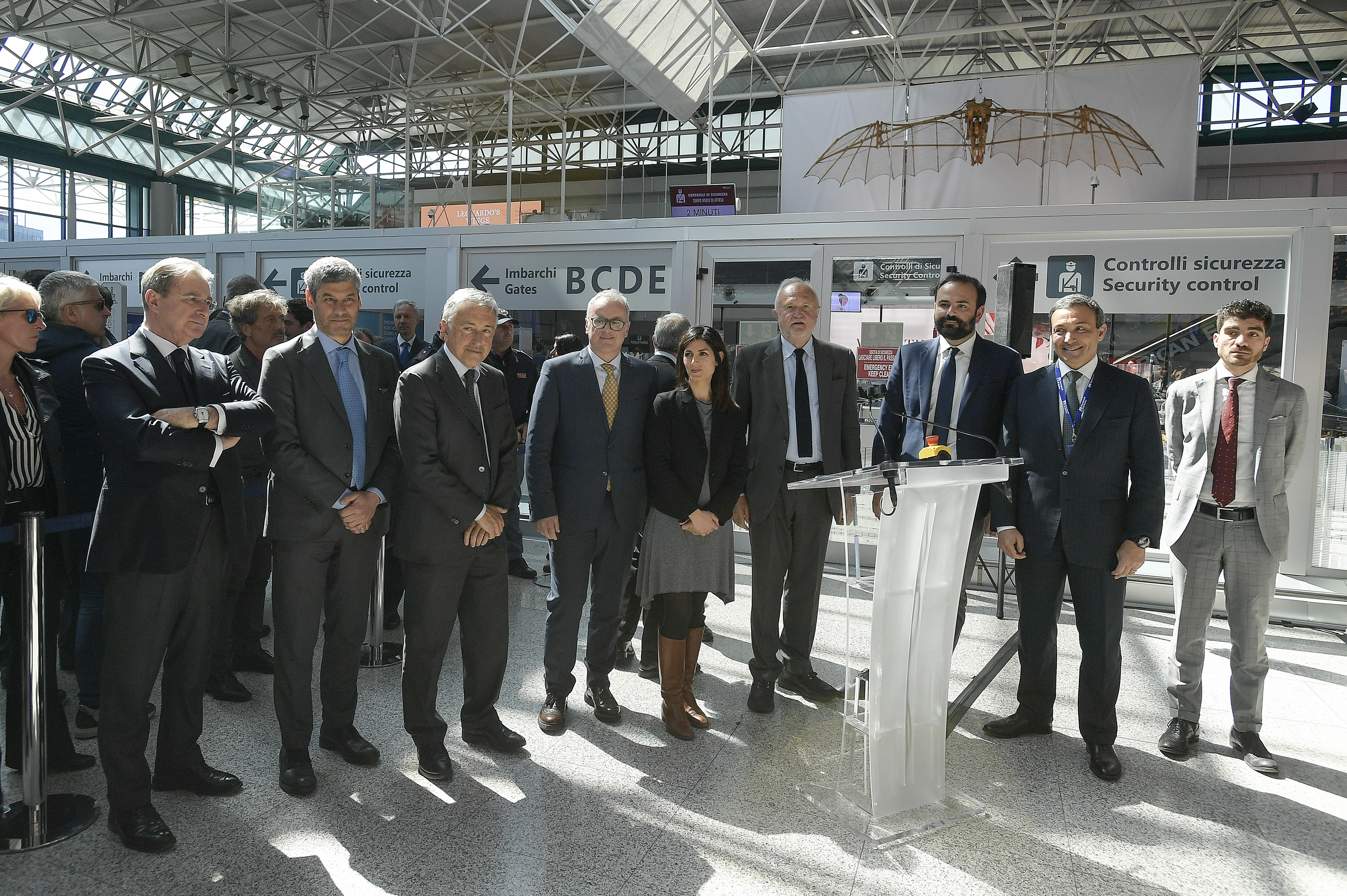 A distinctive feature of the exhibition is the display of five spectacular life-size reproductions of flying machines, as well as a multimedia area that will allow passengers to interact with Leonardo's drawings on flight dynamics. The exhibition, curated by prof. Paolo Galluzzi, President of the Committee for the celebrations of Leonardo is developed in two distinct areas of the airport: at the departures of Terminal 1 and in the hall of Terminal 3, along the historic glass facade recently restored to the beauty of the original design.

The Flying Man, the most imposing and spectacular of the reproductions on display at Terminal 1, is a model of flying wings with an opening of 11 metres, driven by the strength of the arms, legs and head of a man. Images are projected on the adjacent walls with the reproduction of noises related to the operation of the machine.

The exhibition itinerary continues at Terminal 3 with The Man Bird, the bas-relief depicting a creature half man - half bird and represents the symbol of Leonardo's utopia of transforming man into a perfect imitator of birds. Also at the departures of Terminal 3, three other fascinating representations of Leonardo's genius have been arranged: the Flying Vessel, operated by man, which alternately moves two large blades similar to those of a rowboat, the Fan Flight Machine, a giant glider that exploits the energy of the wind and the air currents in imitation of the flight of birds of prey and the "medium" Flying Man, a small-scale reproduction of the model of flying wings, with a wingspan of 6 metres.

Also at Terminal 3, near the Vitruvian Man recently renovated by Maestro Mario Ceroli, a multimedia area has been set up where passengers can interact with Leonardo's drawings on flight dynamics and consult the 32 pages of the Code on the flight of birds. .On the external walls of the digital room, there is information (in Italian and English) on the evolution of Leonardo's studies on flight and on his most important insights in the field of aviation.

The exhibition "The Wings of Leonardo. The genius and flight" was inaugurated today in Fiumicino by the CEO of Atlantia Giovanni Castellucci, together with the Mayor of Rome Virginia Raggi, Councillor for Infrastructure and Public Works in the Lazio Region, Mauro Alessandri, the Mayor of Fiumicino Esterino Montino, the Chairman of Aeroporti di Roma, Antonio Catricalà and the CEO of Aeroporti di Roma Ugo de Carolis.

The initiative is part of the cultural initiatives that characterise the airport experience of passengers of the Leonardo da Vinci airport, which in recent years, thanks to the “Atlantia cure" has become the most popular hub for passengers in the Western world according to official surveys of Airport Council International.