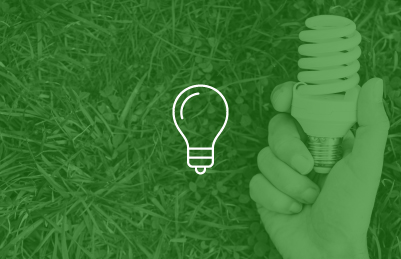 Since 2009 we have dedicated dozens of projects every single year to reducing energy consumption and increasing efficiency. 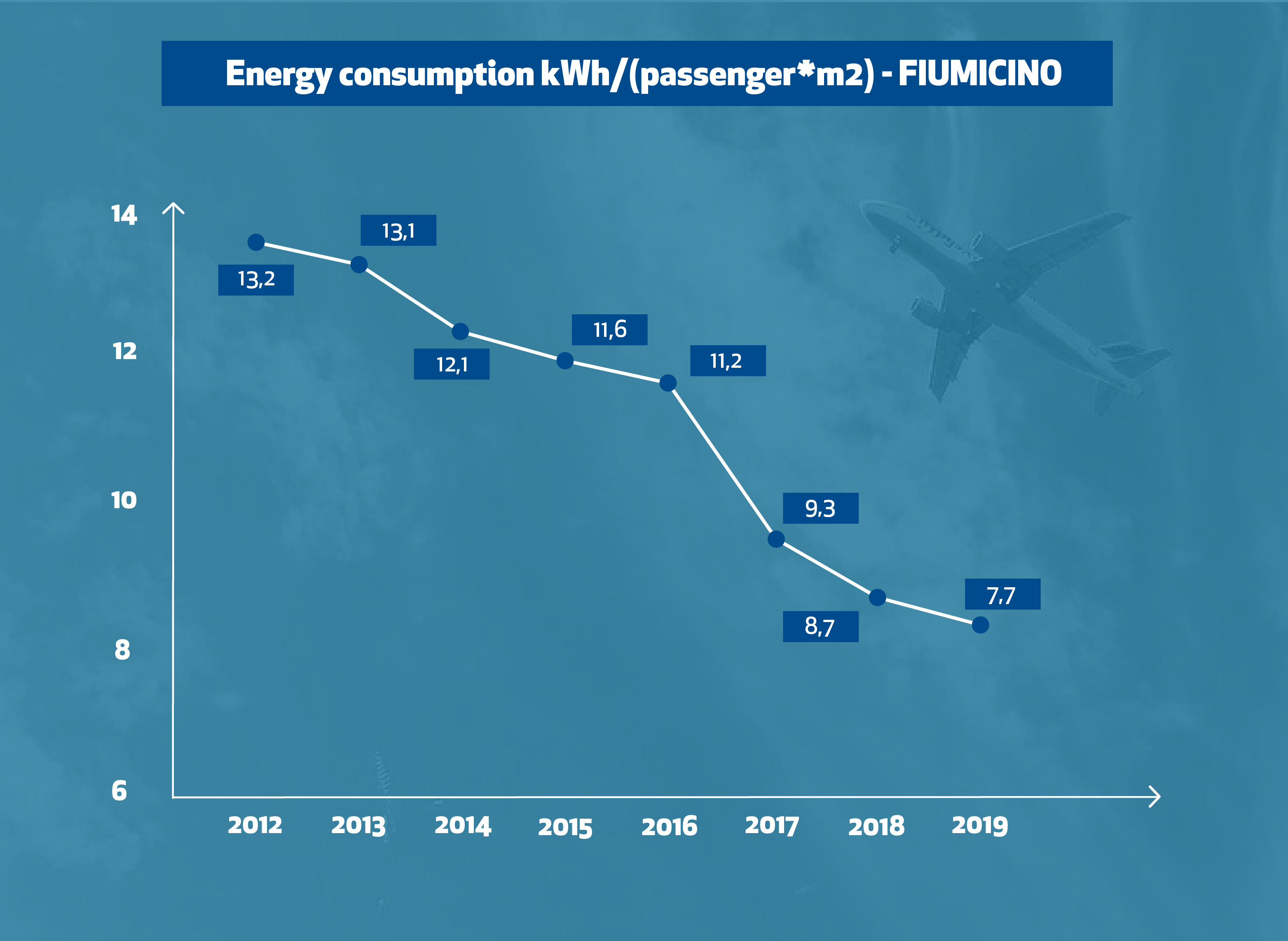 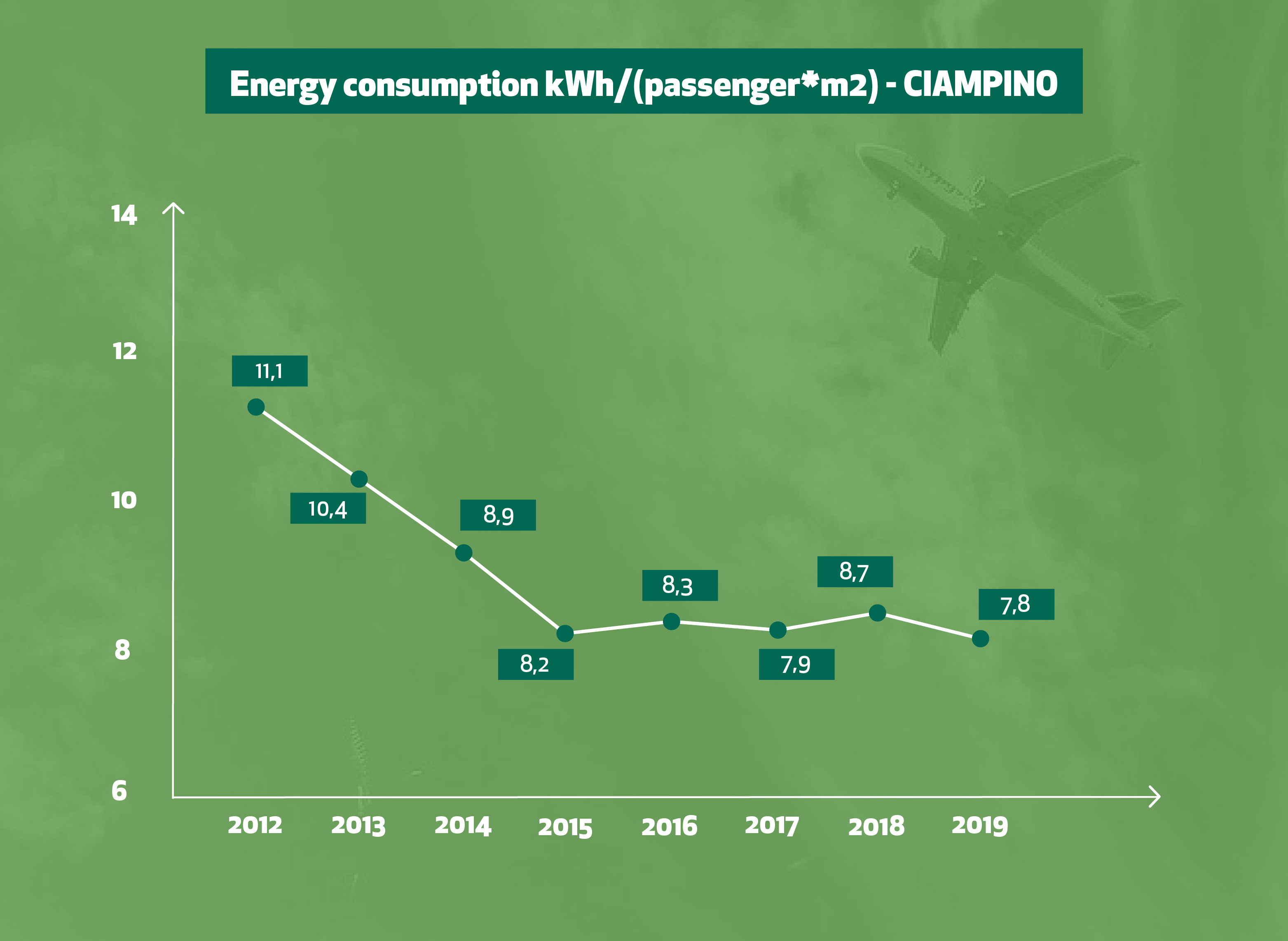 Inside Fiumicino Airport, there is a natural gas cogeneration power station covering an area of over 4,000m2, that meets 98% of the airport “city’s” electrical requirements, reducing its dependence on the grid. The “Leonardo da Vinci” Airport is in fact, one of the cities with dimensions comparable to those of Cagliari Airport: with a total surface area of 1,600 hectares and 250,000m2 of terminals, the airport's daily consumption - including passengers, airport operators and related industries - generates an energy requirement of up to 28MW. The power station, thanks to the heat recovered from the exhaust gases generated by the engines and their cooling circuit, produces about 70GWh of thermal energy annually, enough to cover almost the entire demand of the airport district heating network. This heat recovery prevents the emission of around 15,000 tonnes of CO2 into the atmosphere per year.

Since 2015, the power plant has obtained and maintains annual CAR (High Yield Cogeneration) qualification from the GSE (Gestore dei Servizi Energetici - Manager of Energy Services). The plant, owned by Fiumicino Energia S.r.l., is managed by the subsidiary Leonardo Energia S.c. a r.l. The site and its organisation are ISO 14001:2015 certified and Emas certified.

There are three Rolls-Royce engines in the power station, which consist of 20 cylinders arranged in a V-shape with respect to the shaft, and that, through their respective alternators, are able to generate an electrical power of 8,560kW each.
The recovery of thermal energy takes place mainly through three 5MW boilers, one for each engine, which are able to use the heat from the exhaust gases which would otherwise be lost. Before being released into the atmosphere, residual gases are chemically treated and carefully monitored in accordance with the law.
There is a thermal storage system in the power station which consists of four 26m high insulated silos, each one containing each 250m3 of overheated water, to allow for greater flexibility in managing the power station and improve its efficiency.
The power station supplies the airport district heating network which runs, together with the electrical and IT infrastructures, through underground tunnels that are around 4,500m long.
During the summer period, the heat recovered from the power station is used to produce cooling energy thanks to there being absorption and refrigeration systems linked to the district heating network.

By clicking on "ACCEPT NECESSARY COOKIES" or on the "X" to close this banner, only cookies that are functional for browsing the website will be installed on your device.

By clicking on "ACCEPT ALL COOKIES" you will give your consent to install all cookies including the profiling ones.