From today, passengers at Leonardo da Vinci will be able to admire, in the setting of the square in boarding area A, inaugurated in the presence of President Mattarella last May, the work - never before exhibited to the public - by the artist Marcantonio called "Grande Anima” presented at a ceremony attended by, among others, the CEO of Aeroporti di Roma Marco Troncone, the President of Enac Pierluigi Di Palma and the Minister of Culture Gennaro Sangiuliano.

It is a work of contemporary art with a strong visual impact. It reproduces in its original size, twelve metres long and weighing over seven hundred kilograms, the skeleton of a whale, illuminated inside by lamps from all over the world. The lights that illuminate the imposing installation constitute its still-burning soul, at the same time representing our society: if the animal lives, it also depends on us. It is an invitation to reflect on how nature is in our hands and depends on our care, reminding us how the world's beauty is fragile and closely linked to human behaviour.

In collaboration with Chora Media, travellers will be able to listen, via podcast, to the story 'Grande Anima - La balena di Fiumicino', which tells the story of the grey whale that arrived in 2021 off the coast of Fiumicino after various stops, including the Gulf of Naples and Anzio. 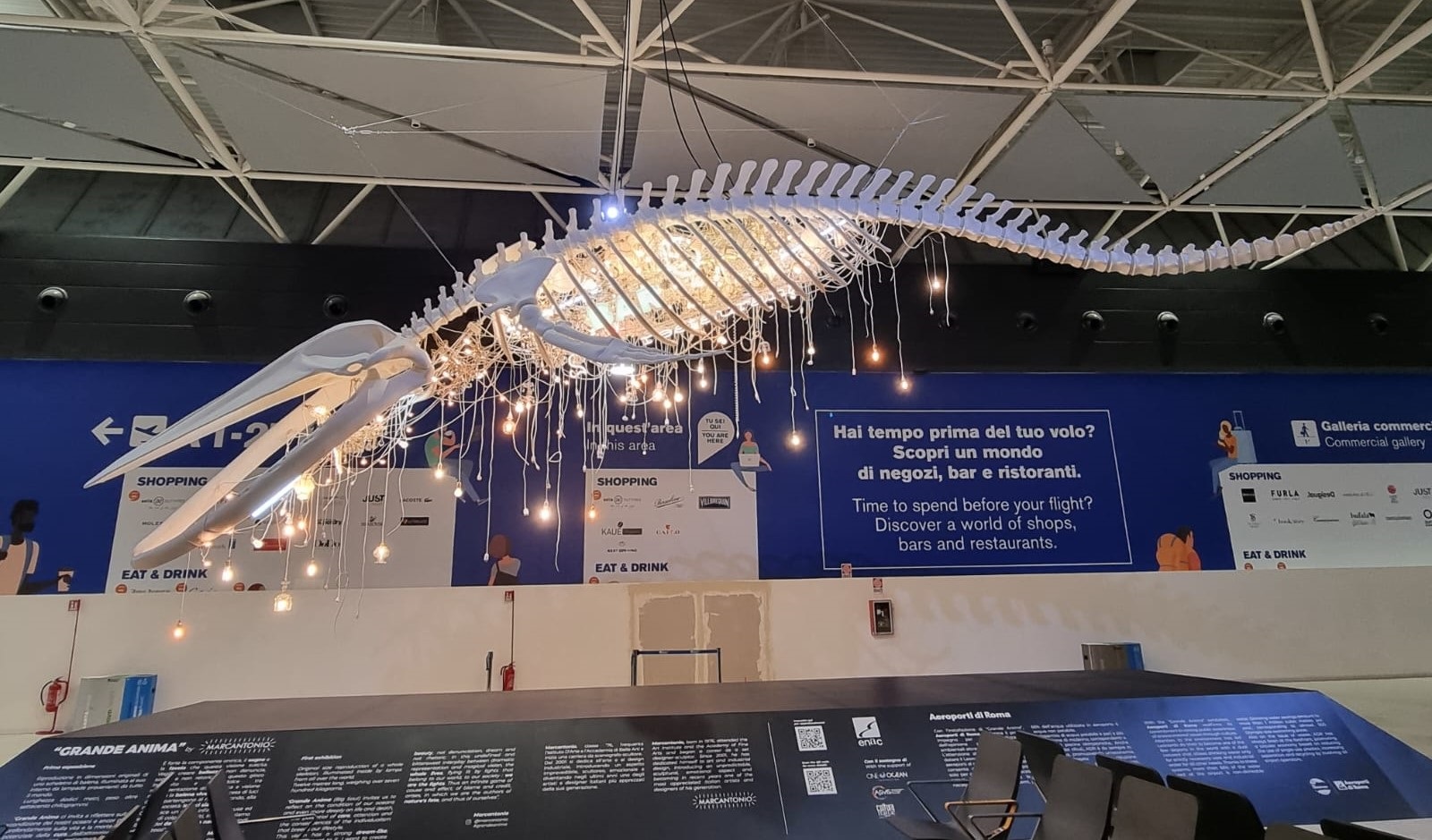 With the installation of 'Grande Anima', Aeroporti di Roma once again confirms its commitment to raising public awareness on environmental issues such as saving water and recovering plastic, the leading cause of pollution of the seas, this time through culture.

The protection of water resources

For years, ADR has been pursuing a strategy of minimising the consumption of drinking water, thanks to the 'dual' water distribution network in Fiumicino, which allows drinking water to be used only for essential purposes, while using industrial water for all other needs.

The airport's industrial water supply system has two distinct sources: water from the Tiber intake and water from the biological purification plant, which converge in a storage basin known as the 'pond', with a nominal capacity of approximately 10,000 m3.

Industrial water undergoes a complex system of processing and sanitisation before being fed into distribution networks intended for specific uses such as heating systems, fire-fighting systems, irrigation systems, and toilet drains. Numerous investments for the extension of the dual network in the various buildings of the airport and for the optimisation of the airport water distribution network have been made and are still ongoing.

This solution has made it possible to constantly reduce the consumption of drinking water by replacing it with industrial water wherever possible. Thanks to these systems, more than 66% of the water used at the airport is non-drinkable water. Drinking water savings amount to more than 1 million cubic metres per year, corresponding to almost 500 Olympic-size swimming pools.

On the issue of waste, ADR has always been at the forefront promoting a circular economy of plastics based on reducing consumption, reuse and increasing separation and recycling, involving all airport operators, with the aim of significantly reducing the use of single-use plastics in the coming years.

The following initiatives are currently underway at the airport:

In 2022, we will have collected more than 380 tonnes of plastic separately at the airport: all the plastic we recover, after careful separation between the different types of plastic (PET, PVC, HDPE, etc.), is processed and turned into a plastic raw material useful for a variety of applications, including plastic bags, wrappers, boxes, benches, etc.

As of 2021, we have zeroed the use of single-use plastic in the offices of Aeroporti di Roma, where all food packaging has been replaced with bioplastics and bottled water has been replaced by a system of drinking water dispensers that, in combination with the distribution of flasks, reduce waste production to zero. These initiatives have resulted in the elimination of about 9 tonnes of single-use plastics, the equivalent of about 660,000 plastic bottles per year.

Our goal is to achieve a circular airport that minimises the waste produced by increasing the recovery of all waste.

This is a sustainable choice that is part of the path undertaken by ADR to progressively reduce its environmental impact and which calls on everyone to make their own individual contribution.

The initiative is supported by One Ocean Foundation, a non-profit foundation working internationally with institutions, companies and individuals to safeguard the oceans; ASVIS, the Italian Alliance for Sustainable Development, the most prominent Italian civil society network, committed to the promotion of the 17 Sustainable Development Goals of the UN 2030 Agenda, and Cultura Italiae, the association whose primary purpose is to disseminate and promote projects, concrete actions and good practices aimed at supporting the world of culture to stimulate, through it, the growth and ethical, social and economic development of individuals and communities as a whole, improving relations between peoples. Cultura Italiae, among others, also oversaw the selection of the work for the criteria of sustainability and environmental awareness.

Cetaceans are marine mammals that include species of Mysticetes, or baleen whales (e.g. whales, rorquals and humpback whales) and Odontocetes, or toothed whales (e.g. dolphins, killer whales and sperm whales). The two groups differ in the presence of true teeth and a single blowhole in the case of Odontocetes, and in the presence of bristle-like filtering structures, called baleen, and two blowholes in Mysticetes.

Cetaceans, and in particular great whales, have a fundamental role in capturing large amounts of CO2 from the atmosphere combating climate change. Indeed, due to the phenomenon called whale pump, whales, interacting with phytoplankton, contribute to move carbon from the surface to the deeper layers of the ocean. These large marine mammals, as all the living beings, accumulate carbon in their bodies during their long lives and, when they die, their carcasses sink to the ocean floor, carrying all incorporated carbon that is then stored within the marine sediments. The larger and longer-lived the organisms are, the greater the amount of carbon stored; thus, whales play an important role of carbon reservoirs with estimations reporting that each great whale may sequester 33 tons of CO2 on average. Moreover, whales dive underwater to feed but return to the surface to breathe and to release fecal plumes rich in nutrients, like iron and nitrogen, essential for the growth of phytoplankton which has a key role in turning the atmospheric CO2 into oxygen through the process of photosynthesis. The growth and development of phytoplankton is therefore closely linked to whales. The study published by the International Monetary Fund (authors R. Chami, T. Cosimano, C. Fullenkamp e S. Oztosun) reports that phytoplankton could capture about 40 percent of all CO2 produced each year, equivalent to the amount of carbon dioxide captured by 1.70 trillion trees and to four Amazon forests.