Unexpected reception today at Fiumicino for the men's National Water Polo team and many other athletes, specialised in the various Olympic disciplines, departing at 6.30pm from Leonardo da Vinci direction Rio 2016. 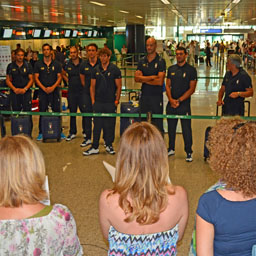 Waiting the Italian athletes and farewell them, in fact, was Aeroporti di Roma, in collaboration with the Academy of Santa Cecilia and the CONI (National Olympic Committee), has organised a real "singing" flash mob, wishing good luck to the Italian athletes departing, with the "Fratelli d'Italia" national anthem, executed unexpectedly by the choir during the check-in.

The performance earned appreciation by the athletes and hundreds of passengers present at the terminal, who took part in the flash-mob also singing the anthem.