12 October 2018
ADR the popular music of the “ottobrata romana” unveiled at Fiumicino
A voyage through traditional Roman music: songs, folk songs and serenades, interpreted in the airport by the Popular Italian Orchestra which will perform in the Auditorium Parco della Musica on Saturday the 13th

The major Italian airport hosted the best of Roman traditional music today, providing international travellers departing from Terminal 3 the “Ottobrata Romana” show, a sneak peek in the airport and scheduled for performance at the Auditorium Parco della Musica of Rome. 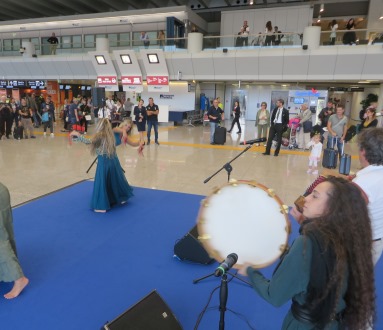 This is the latest cultural entertainment initiative organised by ADR in collaboration with Fondazione Musica per Roma in order to provide Leonardo da Vinci travellers with an Italian folklore musical show, with particular reference to the Appenine area: saltarello, tarantella, tammurriata, pizzica and trescone. Leading the performance was maestro Ambrogio Sparagna who, one of the most popular authors and interpreters of the new popular Italian music, was accompanied by some Orchestra Popolare Italiana musicians and dancers. To the benefit of passengers in transit, the artists replicated some parts of the show that has recently kept them busy on tour in Kazakhstan, Uzbekistan, Malta, Russia and the United States, among other places. Amazed as they found themselves involved in the artist exhibition while awaiting their flights, travellers departing from the airport did not miss the chance to take video and selfies among the Terminal 3 check-in desks with the folklore artists.

This was a special occasion that is part of the numerous cultural entertainment initiatives organised by Aeroporti di Roma in the Capital's main airport, an international cultural showcase where major shows scheduled for performance in Rome are unveiled in a sneak peek.