24 July 2018
Pre-flight chess lessons
Passengers flying from Boarding Area B can play chess with the biggest national chessboard champions. 10 dedicated chess stations thanks to the initiative by ADR in collaboration with Roma Capitale and the Italian Chess Federation

“Chess on the fly” is the new entertainment event organised by Aeroporti di Roma in collaboration with Roma Capitale and the Italian Chess Federation for passengers at Leonardo da Vinci Airport. All next week, passengers in departure from Boarding Area B at Fiumicino will have the chance to challenge one another on the 10 chessboards fitted out in specific “corners” for the initiative. 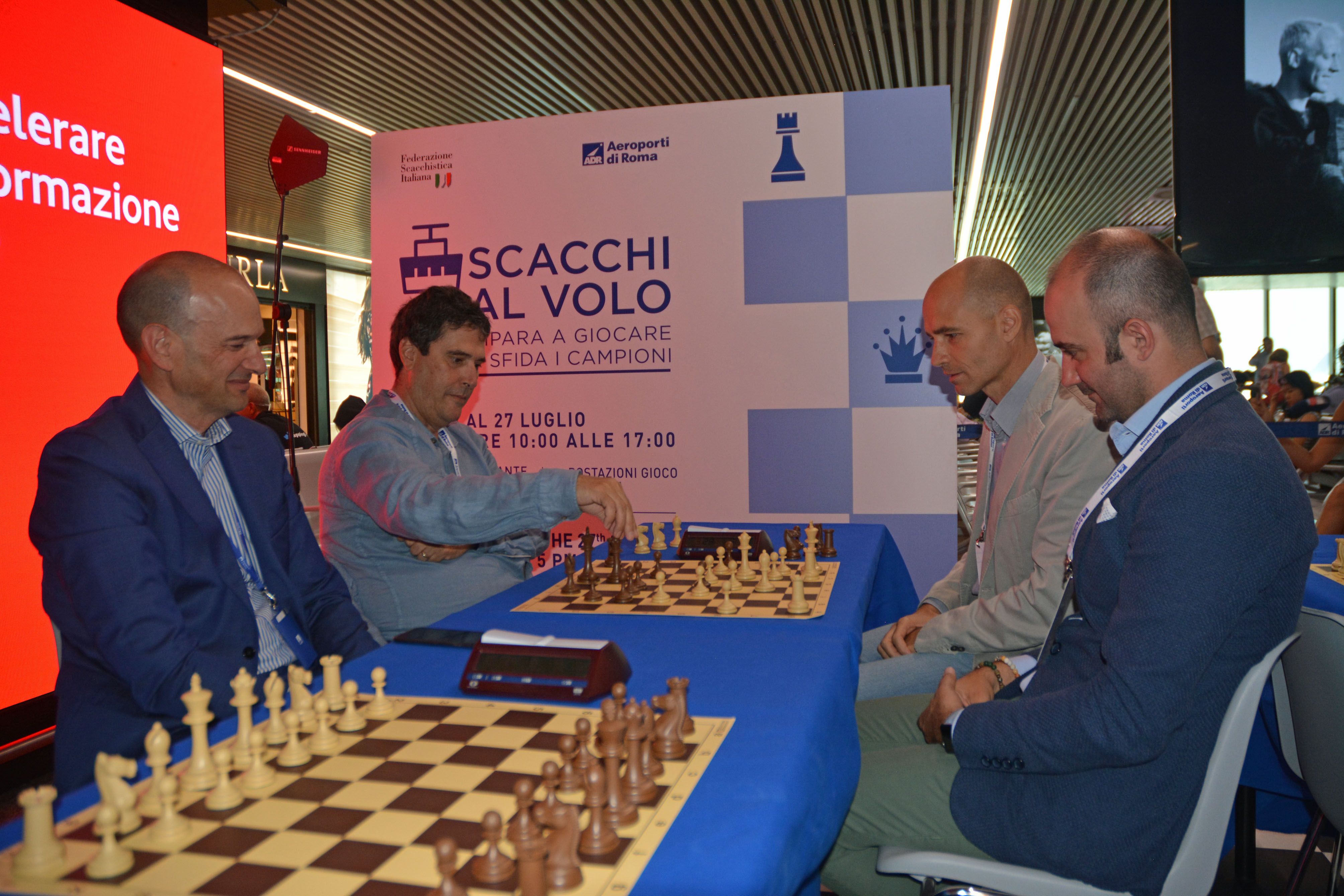 The cycle of events scheduled in coming days also sees two instructors from the Italian Chess Federation involved, who, until 27 July from 10:00 to 17:00, will entertain travellers with mini-lessons on the basic principles, the most strategic moves and the philosophy of the 64 black and white squares.

The corner in Boarding Area B, where a giant public chessboard has also been installed, was unveiled with a performance by Grandmasters (the highest world title) Lexy Ortega from Rome (Italian Champion 2009) and Roberto Mogranzini from Perugia. The two champions competed in one match of three games, thrilling on-looking travellers as well as the Director of Airport Management for Aeroporti di Roma, Ivan Bassato, and the Councillor for Sport, Youth Policy and Major Events for Roma Capitale, Daniele Frongia.

“Bringing chess to the airport is something completely new; it matches the spirit of travelling perfectly, making one of the most exciting strategy games in the world available to passengers. In our “corners”, passengers will be able to sit across the board from strangers, connected by a passion for chess, or end games left unfinished by other players whose flights have already taken off. Chess is a game of cosmopolitan vision that finds its ideal location in our airport. I thank the Department for Sport for Roma Capitale and the Italian Chess Federation for this positive collaboration, which joins the cultural entertainment initiatives we offer to passengers every day,” stated the Director of Airport Management for Aeroporti di Roma, Ivan Bassato. 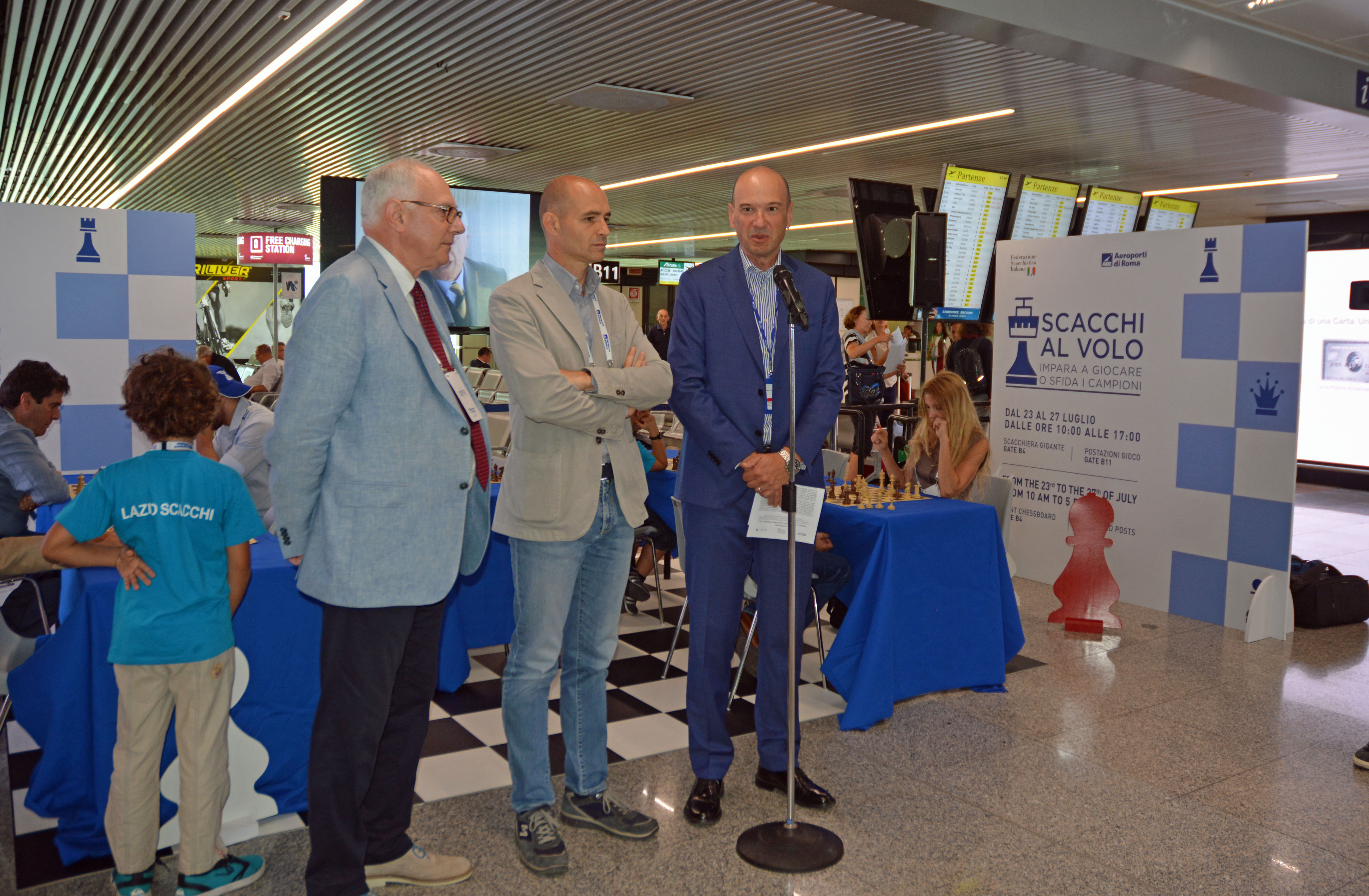 “Part of an overall strategy to improve the quality of time spent in the airport, the ‘Chess on the fly’ project has been well received, not only as a moment of entertainment, but one of true sport; the game of chess is now recognised as a true sporting discipline by the Italian Olympic Committee. As Department for Sport, we have promoted various chess-related projects over the years and have brought them to schools and squares, which has been met with great approval. Today we find ourselves at the airport – an international environment of cultural exchange. This strong message bestows the correct value to the discipline, which, through the application of a strategy, encourages concentration and the lowering of cultural barriers, also allowing for the game to be continued between one passenger and the next. Not to mention the added value of the Italian Chess Federation instructors present to provide lessons and suggestions,” stated the Councillor for Sport, Youth Policy and Major Events for Roma Capitale, Daniele Frongia.

Luigi Maggi, Chairman of Lazio’s Regional Chess Committee, added: “We are honoured to be able to contribute to the ‘Chess on the fly’ initiative and collaborate 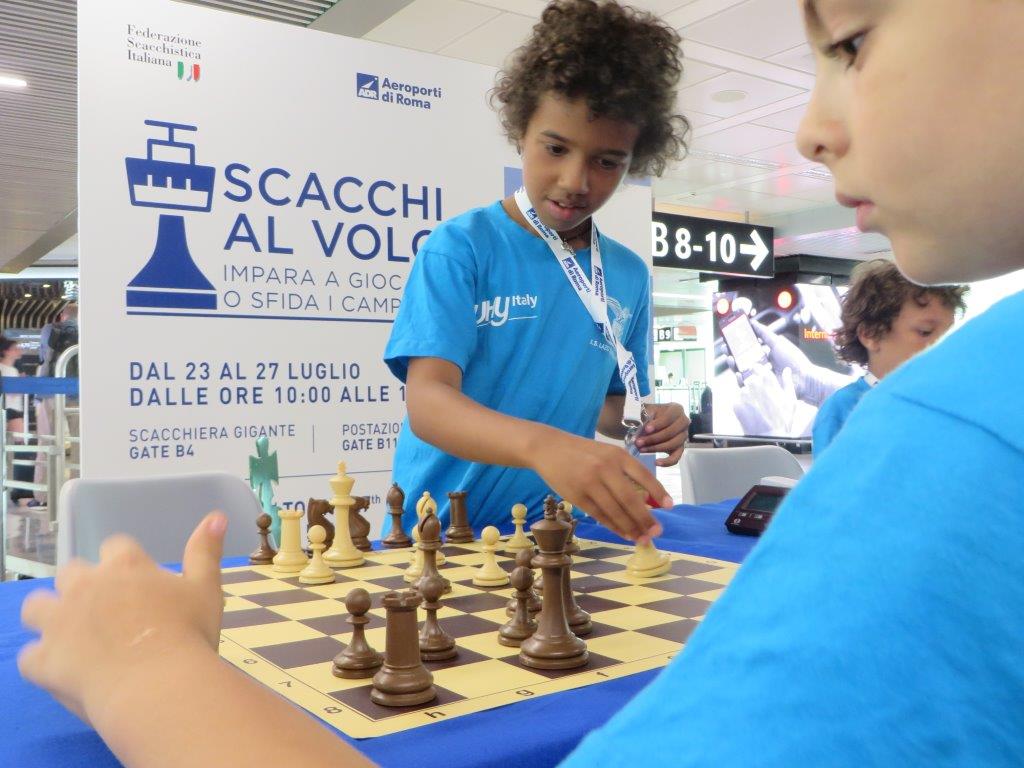 with Aeroporti di Roma on this important piece of cultural entertainment in an airport, particularly one dedicated to Leonardo da Vinci. There is a wealth of historical information describing him as a passionate chessplayer, both in Milan with the Visconti and Sforza families and in Mantua with Isabella d’Este. There will surely be many passionate people travelling who will be delighted to play against one another and contend with our Masters. Those who are not such experts in the game will discover a new world at their fingertips because chess, just like music in that it overcomes all barriers, is a universal language.”

“Chess on the fly” is part of the programme of initiatives put together by Aeroporti di Roma in order to improve the quality of time spent in the airport. This characteristic, namely promoting cultural initiatives taking place in the city, also played its part in Fiumicino’s selection as Best Airport 2018 as part of the biggest category award held by the Airports Council International
Back